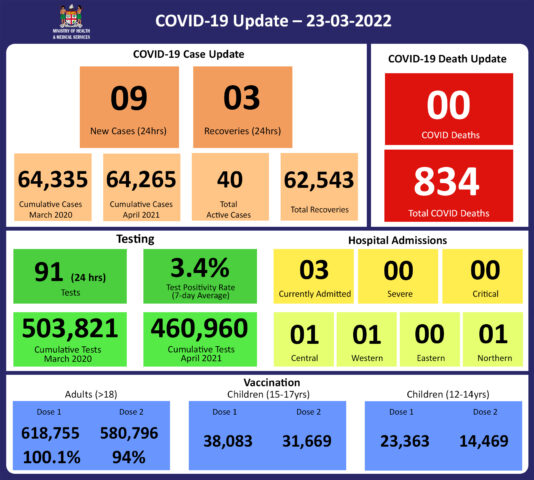 At the global level, WHO had advised that the acute phase of the pandemic could soon be over but it would depend on how quickly we meet the target to vaccinate 70% of the population in each country, among other factors. There is a resurgence of COVID in Europe, China, NZ, and Australia. In the past couple of weeks, the UK and several countries in Europe, including Germany, France, and Switzerland, are experiencing a new wave. At least 12 countries, geographically extending from Finland to Greece, are experiencing new increases in cases, some quite marked, such as Austria exceeding its pandemic peak, and Finland with an 85% increase from a prior week. Many of these countries are also showing a rise in hospital admissions.

While we have not seen a new major variant, there are many reasons to expect that this is possible in the months ahead. There are well documented extensive animal reservoirs and cases of spillover to humans, there are a large number of immunocompromised people globally in whom the virus can undergo accelerated evolution, and the ongoing lack of containment of the virus globally.

COVID is endemic in Fiji and as such the risk of resurgence will be to the unvaccinated, those with waning immunity, and those who have not had a vaccine booster dose. More importantly, the vulnerable among us will be susceptible to severe disease and death (even if they are vaccinated) when compared to the non-vulnerable group. Also, the non-vulnerable and mobile (e.g. young adults and adolescents) will always be able to transmit disease to the vulnerable. We expect that with the upcoming general elections, population mixing will be unavoidable.

Our vaccination coverage stands at 87% of the population 12 years and over and we have quite a lot of post-infection acquired immunity in the population. While this is good, unfortunately in terms of protection:

As of 23rd March, a total of 114,924 individuals have so far received booster doses. While members of the public have been advised to obtain their booster dose after at least 5 months from their second COVID-19 vaccine dose, we will shortly be advising a shorter interval period in recognition of the risk of disease surge. Moderna vaccine and Pfizer vaccines are both available for adult booster doses.

Our current booster program has been slowed down by slower uptake and deployment challenges relating to the need to deal with the current surge of leptospirosis, typhoid, dengue fever, and influenza we are facing Fiji-wide. The public is urged to get booster vaccine doses, and the list of vaccination sites is provided daily on the MOH webpage. There is also recent evidence that indicates an increased need to vaccinate children between 12 and 18 years to sustain community-wide protection. So given the competing issues, I have instructed teams to go back to health facilities and do targeted booster programs for the vulnerable and the willing and to focus on our 12 to 18-year-olds through the school vaccination program. Furthermore, we are close to opening an avenue to getting access to paediatric doses of vaccines.

Given the current stocks of Pfizer vaccine we have we will be using Pfizer for the ongoing primary 2 dose schedule of children and adults and as the booster dose.

We are beginning to see a reduction in people presenting to health centres with acute respiratory illness, suspected leptospirosis, and suspected dengue fever, suggesting reductions in the current surge in outpatient cases. These declining trends of leptospirosis and dengue fever, despite the persistence of weather conditions conducive to their ongoing spread, are likely a result of the related public health measures that have been put in place. However, there remains the risk of disease resurgence if public health measures taken are not maintained.

The decline in cases has reduced the strain on our outpatient services, however, the Ministry will continue to work on measures to open more facilities with extended service hours, and to streamline outpatient services to help reduce waiting times. Many of our staff have returned from annual leave that had been deferred during the second and third waves of COVID-19, as well as sick leave during the recent increase in influenza. Also, adjustments have been completed in our outreach programs to deal with LTDD, and vaccination needs and staff have been freed up for outpatients services in health centres.

The Ministry is working with the Ministry of Economy in pursuing the engagement of General Practitioners, Private Dental Practitioners, and Private Medical Laboratories, to provide and support outpatient services to the general public in a public-private partnership arrangement. We see this engagement as a key strategy to improve surge capacity support.

The current wet weather around the country continues to promote the surge of our endemic climate-sensitive diseases, leptospirosis, typhoid, and dengue fever. Though we have noted a decrease in leptospirosis hospital admissions, we are also aware of continued heavy rain in parts of the country, particularly the Western Division. As such the medical advice we provide needs to be followed, while we continue to mount our public health and clinical response. Please heed our advice to protect yourselves and your loved ones.

There have been 1394 lab-confirmed cases of leptospirosis this year, with 164 new cases to report since the last update a week ago, with 70 cases in the last week, and 94 more recorded for previous weeks.  A notable decrease in cases has been noted in the last week, with the weekly case number now below the national outbreak alert threshold.

In the Central Division, there have been 509 cases, with 33 cases in the last week and 40 more cases for previous weeks. Case numbers have declined below the outbreak threshold in Central in the last week.

For national leptospirosis hospital admissions so far this year, there have been 429  people admitted in total. There have been:

Sadly, there are 2 more deaths caused by leptospirosis to report since the last update on 18/03/22: a 23-year-old female from Ba on March 19th, and a 13-year-old from Nadi on March 11th. There have been a total of 29 deaths from leptospirosis this year, with 21 in the Western Division, 3 in Central, and 5 in the North.

The leptospirosis bacteria is spread to humans through the urine of infected animals, such as cows, pigs, rats, and dogs. To reduce your individual risk, it is important to understand that exposure to animals, soil, mud, and floodwaters during work or recreational activities increases your risk of infection.

Important prevention measures include wearing full covered footwear at all times when going outdoors, avoiding wading or swimming in flooded waters, using clean fresh water to wash up after exposure to muddy waters, and keeping all food and drinks covered and away from rats. For workplaces, practice good personal hygiene at all times, cover cuts and wounds well, and use protective equipment, especially footwear when in flooded and/or muddy areas.

We are also urging all parents and guardians to prevent children from playing in the mud or swimming in flooded rivers or creeks, and ensure that they wear shoes when outside.

Early treatment can decrease the severity and duration of the disease. Please seek medical care if you have recently had contact with floodwaters, mud, or animals, and develop the following symptoms: fever, muscle pain, headache. You may also have red eyes, loss of appetite, nausea/vomiting, dizziness, or feel weak.

Leptospirosis can be treated with appropriate antibiotic medications prescribed by a doctor if treatment is sought early. Danger signs for severe leptospirosis include shortness of breath, coughing blood, chest pain, yellow eyes/skin (jaundice), signs of bleeding (including unexplained bruising), decreased or increased urination, difficulty staying awake. Severe leptospirosis is life-threatening, and anyone with these symptoms must be taken to the hospital immediately.

The reports from the recent FEMAT outbreak response visits to the Navosa Subdivision and the Ra Subdivision have shown that when patients are seen early, and the appropriate treatment is provided, the patients were able to be treated successfully at home and not require admissions into the hospital. The number of people with severe disease and deaths was all significantly reduced. Therefore, we encourage those who are sick at home to seek treatment early so they can recover quickly from their illness.

There have been 73 lab-confirmed cases of typhoid fever this year, with 7 in the last week (10 from the Western Division and 2 each from Northern and Central Divisions). Nationally, and in the Central, Northern, and Eastern Divisions, typhoid cases are below the average, or at the average numbers expected for this time of the year. However, in the Western Division, there are localized outbreaks in communities in Ra, Lautoka, and Nadi. Sadly, there have been 5 deaths from typhoid fever this year. There have been no new deaths reported since the last update on 18/03/22.

Togovere Village in Ra has been designated an area of public health concern. Unfortunately, case numbers have increased from 5 cases to 8. We have previously reported 3 deaths from Togovere, and now we have one further case in critical condition in Lautoka Hospital ICU. This evidence of spread and severe impact has required an immediate escalation of Public Health measures towards a 7 day lockdown period that will restrict movement and assembly of persons. Individuals will also be screened and treatment provided with the aim to eradicate any ongoing disease transmission within Togovere Village. Individuals from nearby villages and areas who may have attended recent social functions at Togovere Village have been advised to watch out for any symptoms they may experience and seek medical advice for treatment. More importantly, the public is advised to adhere to typhoid safe measures.

Typhoid fever is typically found in areas that do not have access to proper toilet facilities and/or clean drinking water. We strongly encourage people who live in rural areas, informal urban areas, and any other areas where access to clean drinking water is limited, to boil all drinking water. We must all also continue to practice basic hygiene measures such as frequently washing hands with soap and water, especially after visiting the toilet and before eating or preparing food.

The preliminary reports from our WASH projects in the Northern division have shown that when communities focus on ensuring good water supply, practising proper hand hygiene, having proper human waste disposal (hygienic toilet facilities), and with complete treatment of those with the disease, outbreaks of typhoid can be stopped in the community; and the overall prevalence of typhoid fever will decrease. Thus, we encourage all our communities to focus on clean and hygienic WASH facilities to stop the spread of typhoid fever in the community.

There have been 1212 lab-confirmed cases of dengue fever so far this year, with 127 new cases since the last update. There are outbreaks in the Western Division (Nadi, Tavua, Ba), however, the decreasing number of suspected dengue cases presenting to health centers in the West is indicating a downward trend.

We continue to urge everyone to get rid of potential mosquito breeding places, such as empty containers inside and outside your homes that may collect water, including discarded tires, flower vases, and pot plant bases. Protect yourself from being bitten by mosquitoes by using mosquito screens in your homes, and mosquito repellents.