Natural disasters such as floods, hurricanes and droughts occur globally every year because of adverse weather conditions or poor land use. Climate change, together with population growth and urbanization as well as travel will increase the number of disasters and change the disease pattern and frequency of disease outbreaks.

Most natural disasters result in major communicable disease outbreaks and deaths. These communicable diseases such as dengue fever, typhoid fever leptospirosis are endemic to Fiji while more recent threats occur from emerging communicable diseases such as Zica Virus (Cook Islands, French Polynesia), Chikungunya (New Caledonia, PNG). An understanding of environmental and host factors, transmission pattern and other characteristics of the infectious agent (virus, bacteria) is essential to the control and prevention of these diseases. However Fiji, an understanding of the risk behaviours is also critical to reduce the incidence and devastating mortality associated with these diseases.

The term outbreak is used interchangeably with the similar but more technical term ‘epidemic’. However, the latter is preferred as it appears to cause less panic or anxiety. An outbreak or epidemic is defined as the occurrence of cases of an illness with a frequency that is clearly in excess of what is expected in a given area, therefore, demanding emergency control measures. The Republic of Fiji is currently experiencing a national outbreak or epidemic of dengue fever. Dengue fever infections in Fiji occur throughout the year (endemic) but what is unique in this situation, Dengue serotype 3 (DEN3) is an uncommon type of dengue that has not been detected in the region for many years. The outbreak of dengue fever in Fiji outbreak was initialized described as a localized event in Suva and central division but now the incidence of disease has expanded to other parts of the country.

There are a few reasons for the increase in incidence and risk of communicable disease outbreaks in Fiji. Firstly, our location as the hub of trade and travel in the South Pacific increases the populations’ vulnerability and risk to new and emerging communicable diseases. Humans that travel are common hosts to spreading these diseases across borders, often unaware of incubating the agent (virus) because they do not display or experiencing any symptoms or signs of disease until reaching their destination.  Secondly, trade brings into the country a lot of air and sea traffic that potentially carries breeding places for mosquitoes from a foreign country. In addition, the other important factor is related to a changing environment commonly referred to as an impact climate change or extreme weather condition that precipitate frequent occurrence of natural disasters. There is sufficient evidence to show that climatic conditions increase the risk of communicable disease events such as outbreaks in the region. During natural disasters, Pacific island countries are commonly affected because of unprotected exposures to the elements, poor housing structures, lack of proper utilities related to poverty or access and an element of inadequate disaster preparedness efforts due possibly either to ignorance or laissez-faire attitude.

The impact of communicable diseases may occur immediately after the disaster but most generally occur weeks after the event due to displacement, disruption of utilities and access to health services, and limited choice in food supply and limited access to basic needs. Communicable diseases that commonly increase after floods in Fiji are diarrhoeal diseases, leptospirosis, dengue fever and typhoid fever. The most common diseases with the highest recorded fatalities are leptospirosis, which presents similar and often mistaken for the severe haemorrhagictypre of Dengue fever. In figure 1, there was a significant increase in cases of Leptospirosis at flood prone areas in Fiji, at least 5-8 weeks after a flooding event. There were approximately 300 cases with 25 deaths following floods in 2012. One of the high risk behaviours associated with this disease in Fiji and commonly seen live television, is wading through infected waters. Unknown to the individual is that animal urine in flooded waters in a very small dose entering through the cornea of the eye is sufficient to cause an infection. 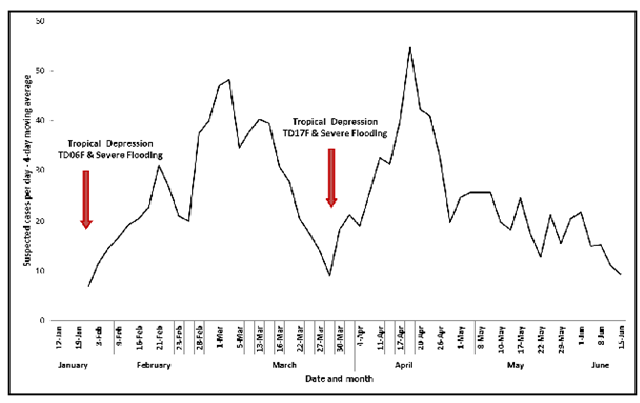 Dengue fever on the other hand is not directly associated with flood because all the containers are washed away (but not destroyed). A dengue fever outbreak may occur when mosquitoes begin breeding again in ideal conditions (man-made containers) after a flood which usually is at least 6 weeks after a flooding event. Transmission of the virus by young mosquitoes can be further exacerbated by disruption of basic water supply and poor sanitation. There are certain risk behaviours such as increased exposure to mosquitoes while socializing outside, wearing minimal clothing due to humidity, movement of infected persons to another area and changes to the environment.

The risk of disease outbreaks and deaths during natural disasters and public health emergencies may be further minimized through early introduction of disease surveillance for early detection of outbreaks, epidemic preparedness, effective prevention and control including case management. Early detection, reporting and response are vital to limit the spread of outbreaks and epidemics. Failure to implement timely, effective and coordinated measures could also result in the occurrence of other chronic diseases:

It never ends with the list of communicable diseases that increase after natural disasters and extreme weather conditions which benefit the proliferation of the vectors (mosquitoes) due largely to the risk bhaviours of humans.

The greatest challenge with these diseases after a natural disaster is the common clinical presentation that is indistinct from others. Although caused by different agents, they often require a different treatment regime for infected individuals. For example; Dengue fever is similar in presentation to Leptospirosis but is a virus infection with no specific treatment while the latter is only effectively treated with antibiotics early in the disease course. It is often uncommon to have patients presenting to the clinic with one disease and sent home to return with another, especially when there are no diagnostic laboratory tests with 100% accuracy to detect either disease. Commonly, a subjective decision is made based on severity of presentation. This emphasizes the importance of prevention at the individual level on avoidance of floodwaters and reduction of man-made containers that breed mosquitoes. The individual level motivation must occur before any successful engagement of the community. Mass communication done proactively has an important in educating the public to adopt protective behavior and in reducing the risks to the individual, family and community.