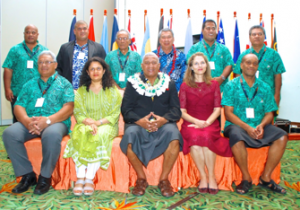 The impact of climate change on health systems has been taken on as a challenge for Ministers from Pacific Island Countries and they have issued a Kaila for strengthening climate resilience.

It has been recognized that the real and potential impacts of climate variability on health systems is an immediate challenge in the Pacific. Kaila is a collective voice of Pacific Island Countries to ensure that the Pacific Voice is heard in global conversations.

Following consultations with technical experts and stakeholders, the Pacific Island Ministers have called for action on:

The Pacific Island Ministers have also committed to the Sustainable Development Goals (SDGs) to help secure the future for Pacific Island people, planet, peace and prosperity.

The meeting outcome also saw the importance of the Global Strategy for Women’s, Children’s and Adolescent Health (2016-2030) that reflects a new consensus on the need to better prioritize reproductive, maternal, newborn, children and adolescent health in humanitarian or fragile settings such as natural hazards, extreme climatic conditions or disease outbreak that impact Pacific Island Countries.

The 3 day meeting was hosted by the Fiji Ministry for Health and Medical Services, in collaboration with the United Nations Population Fund (UNFPA).