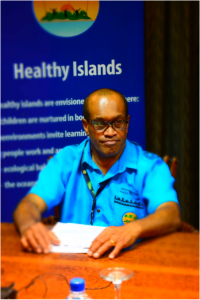 Suicide is a major public health concern in Fiji and the Ministry of Health & Medical Services is concerned with the alarming numbers reported for suicide each year.

In Fiji, an average of 120 deaths by suicide are recorded every year. From July 2012-July 2015 a total of 422 deaths were recorded when compared to 161 road traffic deaths for the same period.

With 10th September marking World Suicide Prevention Day (WSPD) the Health Ministry hopes to create awareness on the fact that suicide is preventable and that talking about it and seeking help can be a life-saving action. The theme for WSPD is Reaching Out and Saving Lives.

The Hon. Minister for Health & Medical Services and Chair of National Committee on the Prevention of Suicide (NCOPS) Mr Jone Usamate said, “We must address the stigma relating to suicide. We must do this to prevent further tragedies.”

“In Fiji, we tend to shy away from discussing mental illness and it is almost a taboo subject”.

Mr Usamate added that suicide is having a major impact on the lives of Fijians so such taboos must be eliminated and the matter must be addressed transparently and without any stigma attached.

“Everyone needs to be healthy mentally and it is everyone’s responsibility to support people who are going through difficult times. There is no health without mental health”, Mr Usamate added.

With the alarming suicide cases reported, the Health Ministry remains committed to put in place strategies towards suicide prevention.

The National Mental Health Unit has conducted trainings with almost 500 health nurses and doctors in all divisions on suicide prevention. A core role of the National Mental Health Unit is promoting mental health wellness and increasing knowledge on positive coping mechanisms and promoting help seeking behavior. These strategies attempt to lessen the impact of mental health problems in the country and thus suicide.

The Health Ministry also continues to work in collaboration with key stakeholders through the National Committee on the Prevention of Suicide.

2015 also marks the first endorsed Mental Health and Suicide Prevention Policy in Fiji and the official launch of this policy will be during the World Mental Health Day celebrations in October.

Meanwhile, The World Health Organisation (WHO) has predicted that over 800, 000 people die due to suicide every year and it is the second leading cause of death in 15-29 year olds. There are indications that for each adult who died of suicide there may have been more than 20 others attempting suicide.