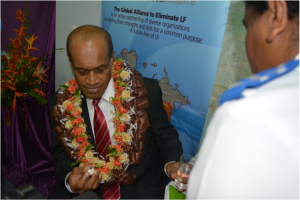 This was revealed by the Minister for Health and Medical Services Mr Jone Usamate as he launched the MDA campaign for 2015 at the Health Headquarters in Suva.

Lymphatic Filariasis (LF) commonly referred to as “Tauna” in the Itaukei dialect, has been burdening the lives of Fijians, particularly those living in rural areas, for several decades now.

LF infection which caused by the microscopic worm Wucherera Bancrofti and spread by mosquitoes occurs mostly in childhood, causing hidden damage to the lymphatic system in the body.

Symptoms of the disease, such as elephantiasis (swelling of the legs); hydrocoeles (swelling of the scrotum) and lymphoedema (cycles of fever), occur later in adult life and can be painful and profoundly disfiguring leading to permanent disability.

Minister Usamate has revealed that the Ministry aims to cover the maximum number of people as it works to eliminate Lymphatic filarisis from the country by 2020, as the WHO has proposed.

“The MDA target this year is to treat more than 80%, if not all, of eligible individuals who reside in communities that fall under the Eastern Division of the Ministry, namely the population in all communities in Lau (Vanuabalavu and Lakeba Subdivisions), Kadavu, Lomaiviti, and Rotuma”, said Mr Usamate.

Mr Usamate thanked the WHO, the Global Alliance for the Elimination of LF, JICA and Glaxo-Smith Kline for their cooperation in the ministry efforts to eliminate LF from the country and also requested support in the future.