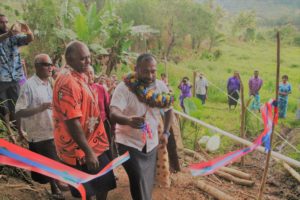 People of the Dogusu Settlement in the Highlands of Ba and nearby villages can now access piped water after the Health Minister Dr Iferemi Waqainabete officially opened their water project.
The Water project was initiated by the Year 6 Medical students of the Umanand Prasad School of Medicine of the University of Fiji after it was established that the settlement fetched water from contaminated sources for their daily use.

Team Leader Mr Sumeet Pratap highlighted that the water available for the villages was not suitable for consumption as it contained many impurities and this could have had adverse impacts on the health of the people.

“During our initial visit to Dogusu Settlement, we found out that there was unsafe drinking water available for the community and we then worked with the relevant authorities to address the issue and this is the result of our continued effort to provide safe drinking water to the people.

He further added the water is a basic commodity for all and every individual should be able to access safe water which will eventually reduce the risks of water borne communicable diseases.

Health Minister Dr Waqainabete acknowledged the efforts of the UPSM medical students and highlighted that Government plans to assist all Fijians with the basic needs.

“Government’s Vision remains the same in providing basic amenities such as water to the remote and disadvantaged communities and we will work very closely with the communities in improving the lives of the people”.

The people of Dogusu expressed their sincere gratitude to the medical students and the Health Ministry for a well initiated project that will be of benefit to them.