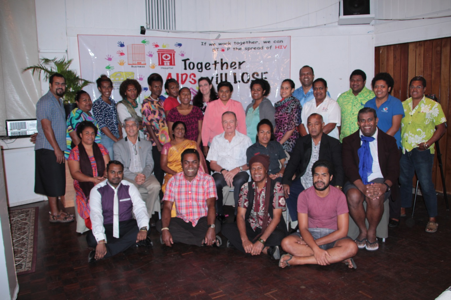 Participants at the HIV prevention training

The 2016-2020 National Strategic Plan on Reducing HIV and STI in Fiji is now ready for implementation by the Health Ministry, in conjunction with stakeholders including civil society organisations which are undergoing training in disease prevention.

This was revealed by the Permanent Secretary for Health and Medical Services Mr Phillip Davies at the national capacity building workshop for stakeholders, held in Suva this week.

Mr Davies noted a collaborative effort was essential in the fight against HIV/AIDS, and this requires commitment from all stakeholders.

“As the fight against HIV/AIDS shifts from an emergency response to a long term response, the role of civil society organisations (CSOs), including community based, non-governmental and faith based organisations in HIV and AIDS prevention, care and support efforts is important”, he said.

“Fiji’s response to HIV has shown improvements and has broken down barriers, especially in the last five years, including a reduction of TB-related deaths amongst people living with HIV by 32% since 2004.

Mr Davies further added that the HIV/AIDS response has always been about partnership.

“I sincerely acknowledge all civil society organisations present in the training here today, as your continuous involvement and commitment is fundamental to ensuring robust local responses to HIV”.

Meanwhile, the five-day training is not only aimed at reducing and reversing HIV infection in Fiji, but ensuring equity and quality of life for everyone by reducing stigma and discrimination.