Minister for Health and Medical Services, Hon. Jone Usamate together with the Fiji Cancer and WOWS Kids today signed the World Cancer Declaration (WCD), with the goal of reducing preventable mortality rates amongst cancer patients.

Fiji has already made several commitments to reducing the burden of cancer, such as the World Health Assembly resolutions WHA58.22 (Cancer prevention and control), WPR/RC62.R2 (Expanding and Intensifying Non communicable Disease Prevention and Control), and adopting a global target of a 25% reduction in premature mortality from NCDs by 2025.

As cancer is the third leading cause of death in Fiji, a reduction in mortality will contribute largely to these commitments. Additionally, reductions in morbidity that can be achieved by comprehensive treatment (requiring radiotherapy and palliative care/rehabilitation services), and reducing stigma surrounding cancer (leading to earlier detection) will have a positive effect on productivity.

“Fiji’s approach in fulfilling the targets of the WCD will be documented in clear strategies for reducing mortality and morbidity in the National Cancer Control Plan (NCCP; in draft) and the country action plan we already have with the UICC to improve clinical systems, services and training,” Minister Usamate said.

“Signing the WCD is a further way to indicate to the UICC, as well as our other international partners and the public that Fiji remains committed to reducing the burden of cancer.”

The Ministry of Health & Medical Services remains fully committed to effectively reduce the burden of cancer after officially becoming a member of the Union for International Cancer Control (UICC) in 2015. 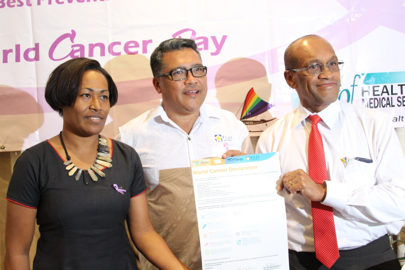