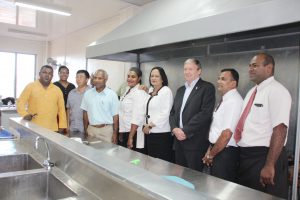 In the quest to enhance the services at the new Navua Hospital, the Ministry of Health and Medical Services had promptly undertaken all the required work to get the kitchen up and running. During the parliamentary session in February this year, the Minister for Health and Medical Services, Hon. Rosy Akbar had emphasised on the Ministry’s commitment to have the new Navua Hospital Kitchen fully operational by April 2017.  As such the work has been completed and the kitchen has been in use, providing locally-prepared meals for patients, as of last week.

Minister Akbar took a tour of the new Navua Hospital and also inspected the operations at the kitchen that has been renovated with cost of $42,000. Minister Akbar said the renovations has been completed through a close collaboration between the Ministry of Health and Medical Services, the Ministry of Infrastructure and Transport, the Construction Implementation Unit of the Ministry of Economy and the Prime Minister’s Office.

“I am also pleased to be able to report that further preparatory works to improve plumbing, landscaping and drainage are under way and should be completed by July this year. The Fijian Government remains committed to developing a healthy Fiji and as such nothing is more important to the Government than improving the health care facilities and services for people throughout the country.

“This new Navua hospital has helped to improve the lives of the people of Navua by giving them access to an enhanced health facility that, unlike its predecessor, is no longer subject to the whims of Mother Nature. Of course, building and equipment are only a part of what underpins a well-functioning health system and the Ministry is also committed to better levels of compassion, empathy and sensitivity shown by our caregivers.

“I can assure the Fijian people that is also one of my Ministry’s top priorities. Whenever a patient visits a hospital or clinic they should feel like the doctors and nurses are fully vested in their health and recovery. Nothing less in acceptable,” Minister Akbar explained.

The Health Minister also revealed the upcoming plans for the new Navua Hospital to establish a training centre for emergency medicine for all the staff in the public health facilities. This is pursed through the Memorandum of Understanding (MOU) signed between the Ministry of Health and Medical Services and the Guangdong Health and Family Planning Commission, People’s Republic of China in 2015.  The delegation from the People’s Republic of China recently visited the Navua Hospital to further explore the potential of establishing the Fiji Guangdong Medical Training Centre.

Last Updated on 5 years by Breast Cancer awareness gets financial boost Awareness on Breast Cancer was further boosted after a group of girls successfully organised a fundraising drive to assist the Cancer Society of Fiji under the Go Bald Give Hope initiative. The leader of the group Ms Sanjana voluntarily shaved her head to […]

Last Updated on 4 years by Anshoo Chandra The partnership between the Ministry of Health and Medical Services with UNICEF has created opportunities for enhanced learning on providing effective nutrition response for emergency preparedness. The partnership has created a 3 days workshop called “Nutrition in Emergencies” that was held from Tuesday 20th to Friday 22nd September […]

Last Updated on 6 years by ADVANCED CARDIOLOGY SURGICAL VISIT   The Ministry of Health wishes to advise that a Specialist Team from the Sahyadri Hospitals will be conducting angiogram advanced cardiology Surgery (CABG) in CWM Hospital from the following dates; The range of these surgeries will include:   Angiogram -3.08.2015-14.08.2015 10.08.2015-25.08.2015   As this […]