Young children to be immunized with IPV Vaccine 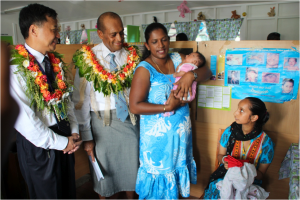 (IPV) into the routine immunization program in Fiji to protect young children from Polio, a

Through this, the Fiji Government joins the world in eradicating the Polio virus and ensuring

that children live in a world free of paralysis due to polioviruses.

Poliovirus invades the nervous system and can cause crippling paralysis, sometimes in a

matter of hours, and the best way to prevent it is by immunizing every child.

While launching the program, the Hon. Minister for Health & Medical Services Mr Jone

Usamate said that although the last clinically confirmed case of polio was in 1962, the health

system has been doing fairly well in the immunization of children which now stands at 95%.

“Fiji has been using oral polio vaccine in the routine immunization since around 1963. At

present four doses of oral vaccine are being given to infants at 6, 10, 14 weeks and the fourth

quality of health services to the people of Fiji.

WHO, UNICEF and the Australian Government for continuously supporting the

worldwide, and the declining number of cases indicates that the “polio endgame” strategy

might be achieved in the not too distant future.

Last Updated on 6 years by What makes for good digestion? Eating a variety of different foods every day and getting enough fluids is the best thing you can do for your digestion. Maintaining good digestion is important to reduce your risk of developing diverticular disease later in life, avoiding constipation, hemorrhoids and certain cancers […]

Last Updated on 5 years by Media training on health issues  The Minister of Health and Medical Services Mr Jone Usamate has called on the media organizations to collectively work with the Health Ministry in disseminating much needed information to the people. This was revealed as he addressed the participants at the media workshop at […]

Statement by the Minister for Health and Medical Services Hon. Dr. Ifireimi Waqainabete

Last Updated on 11 months by   STATEMENT BY THE MINISTER FOR HEALTH AND MEDICAL SERVICES HON. DR. IFIREIMI WAQAINABETE 01/04/2020   Bula Vinaka. After conducting 368 tests ––including another 11 last night –– Fiji has zero new confirmed cases of the COVID-19 virus. Still, there is zero room for complacency.  We may still have […]