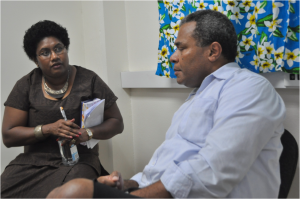 Mere Rainima of WHO in discussion with Dr Mike Kama of MOH at the launch of the hydrocelectomy project.

The Ministry of Health & Medical Services, in collaboration with the World Health Organisation (WHO), launched the surgical intervention of Lymphatic Filariasis at Labasa hospital yesterday.

The Hon. Assistant Minister for Health & Medical Services Mrs Veena Bhatnagar said that approximately 140 hydrocele surgeries were conducted annually since 2010 and through the mass drug administration and other concerted effort, the endemic status has been brought to less that 1% in majority of the medical divisions in Fiji.

“The Ministry of Health advises people with symptoms of the disease to present themselves to health facilities so that they can be assisted with surgical interventions”.

Lymphatic filariasis, commonly known as elephantiasis, is a painful disfiguring disease. While the infection is usually acquired in childhood, its visible manifestations occur later in life, causing temporary or permanent disability.

Filarial infection can cause a variety of clinical manifestations, including lymphoedema of the limbs, genital disease (hydrocele, chylocele, and swelling of the scrotum and penis) and recurrent acute attacks, which are extremely painful and are accompanied by fever.

While the Health Ministry concentrates on the surgical interventions, the WHO has committed to provide technical support in the efforts to eliminate the disease.

Through this initiative the Health Ministry is in the final phase of the mass drug administration campaign with the hope to eliminate the disease in the not too distant future.